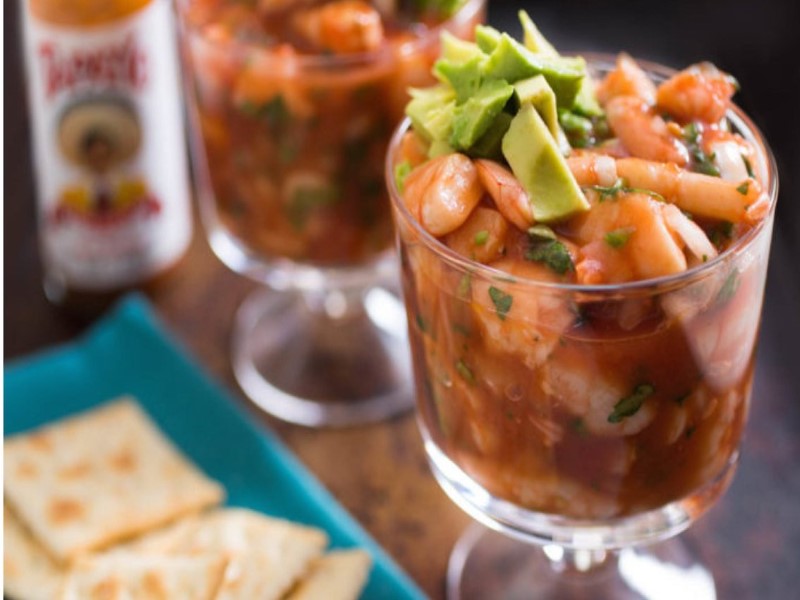 When my mom served shrimp cocktail it signaled the start of a special meal. Served in her colorful frosted Blendo glassware first with a mound of shaved ice, then a bed of shredded lettuce topped with her cocktail sauce and ringed with shrimp and lemon slices, it started with the pretty wow factor and ended in deliciousness.

Little did I know then my future would hold a version that stands up to the classic American dish – Mexico’s cóctel de camarón. It’s more flavorful and fun to eat. Served in a glass, it’s kind of like a cocktail and I think it’s OK to put down your spoon and slurp its remaining drops.

Consider it a relative of the oyster cocktail, the forerunner of the shrimp cocktail. The story goes and has been validated by John Mariani in “The Dictionary of American Food and Drink,” in the 1860s during the California Gold Rush, a miner near San Francisco had a good day of prospecting. Tired and thirsty, when he returned to the city he walked into a dockside restaurant and ordered a plate of raw oysters and a glass of whiskey to wash them down. After drinking the whiskey, he dumped the oysters into the glass and seasoned them with vinegar, ketchup, horseradish and a couple dashes of Worcestershire sauce and Tabasco, then chugged the contents.

Legend says the next day, oyster cocktails were for sale at the restaurant for four bits a glass and were a huge hit. Once oysters were overfarmed, shrimp was substituted. During Prohibition, bars and restaurants had plenty of empty glasses, and the shrimp cocktail we know today was born.

My research didn’t turn up any cóctel de camarón’s history. Ricardo Muñoz Zurita’s 2013 “Larousse Diccionario Enciclopedico de la Gastronomia Mexicana,” has an entry for cóctel de mariscos, but no mention of when or where it was invented.

All you really need to know is it’s really yummy with a fantastic combination of textures and flavors: Plump poached shrimp; crunchy raw onion and cucumber and creamy avocado in a tangy, spicy-sweet tomato sauce. Make sure to eat it ice-cold, from a glass with a spoon (except for maybe the last few drops), accompanied by saltine crackers.

News & Notes
It’s the halfway mark for Sonoran Restaurant Week. So many choices, what’s been your favorite dish so far?

1. Bring a large pot of 3 cups of water to a boil, then add cold shrimp and immediately remove from the burner. The carryover cooking does the job. The residual heat method gave me the most consistent results with the least effort. Although boiling water is too hot to cook delicate shrimp, when it’s added to the water, the temperature instantly drops to about 155°F, perfect for poaching. After 5 minutes off the heat, the shrimp are tender and opaque. For easy eating, cut each one crosswise into three bite-size pieces.
2. Stir together V8, ketchup, lime juice, hot sauce and cilantro in a large bowl. This step can be completed a day in advance and refrigerated in an airtight container.
3. In a small strainer, rinse onion under cold water, shaking off the excess liquid and add to the sauce, then add cucumber. Stir in the chilled shrimp and avocado right before serving.
4. Place in a glass, garnish with lime and cilantro springs and serve with saltine crackers.