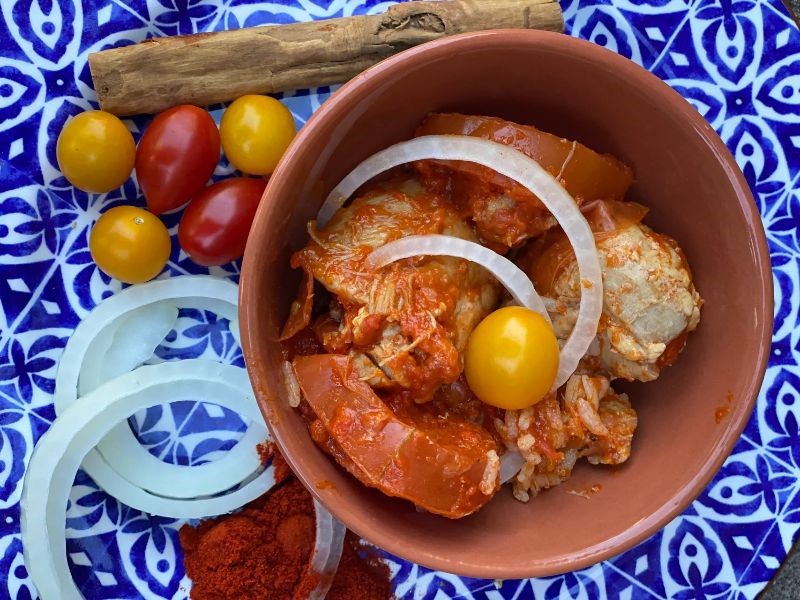 What does your culinary nirvana look like? You may have different categories like people, places and experiences. For my food-related nirvana, the Santa Cruz Chili & Spice Company is at the top of the list.

The rich history of the area isn’t lost on me although I usually drink it in after I’ve made a beeline to get inside and peruse through the spices as well as other kitchen goodies and load up my basket. Since the 1960s, the building on the frontage road has stood across the street from Tumacácori National Historic Park, the abandoned ruins of three ancient Spanish colonial missions: San Jos de Tumacácori and Los Santos Angeles de Guevavi, established in 1691, are the two oldest missions in Arizona. San Cayetano de Calabazas was established in 1756. The O’odham, Yaqui and Apache people mixed there with Europeans creating an early cultural crossroad.

Akin to a detective sleuthing for clues, there are always new discoveries made in the bins and shelves holding the keys to culinary magic. From Adobo Seasoning to Zesty Blend Salt-Free, you name it, they probably have it, and then some. But the true genius is the chili powder.

Jeanie England Neubauer carries on the family traditions her parents started in 1943 with her father Gene’s chili powder. You’ll get a whiff of the intoxicating smell upon walking in. The distinctive red ½ pound packages hold the secret to what the Santa Cruz River valley tastes like. From there, let your ideas be your guide or you can purchase Jeanie’s most recent cookbook, “Santa Cruz Chili & Spice Co. Recipes & History.” It’s a must-have filled with great stories, history, photos and recipes.

“Their crops included a variety of chilies but the mild Anaheim was an original hit,” she writes. “Using re-purposed WWII equipment and the expertise that he developed as a welder in the oil fields, my father developed a process and built a plant that cooked the fresh chilies with pressure cookers and then ground them into a bright red chili paste. He did the same with dried chile pods grinding a rich and flavorful powder that was an instant success with chefs and grocery stores. Santa Cruz Chili Powder and Paste are unique in they contain only pure chile with no additional flavorings of spices.”

Hacienda Corona, now a 5-star bed and breakfast on the fabled Guevavi Ranch along the banks of the Santa Cruz River between the towns of Tubac and Patagonia, is our setting since it’s where the recipes were created. We look forward to cooking with you and talking about the area’s history, food and spices with Jeanie and Nisa. 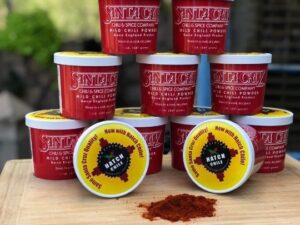 This simple chicken dish combines chicken thighs, onions and tomatoes. When you add the flavor of cinnamon and a dash of Santa Cruz Mild Chili Powder, you have a healthy and savory dinner. Serves 3.

1. Heat olive oil over medium heat in a heavy pan. Brown chicken thighs, 5 minutes per side. Remove from the pan and sauté onions until transparent, about 5 minutes.
2. Return chicken to pan, add tomatoes and a stick of cinnamon on top. Cover pan and simmer for 30 minutes until ingredients are completely cooked and blended. Stir in Santa Cruz Chili Powder, salt and pepper to taste. Serve with cherry tomatoes on top.
*Available at Santa Cruz Chili & Spice Company in person or online.