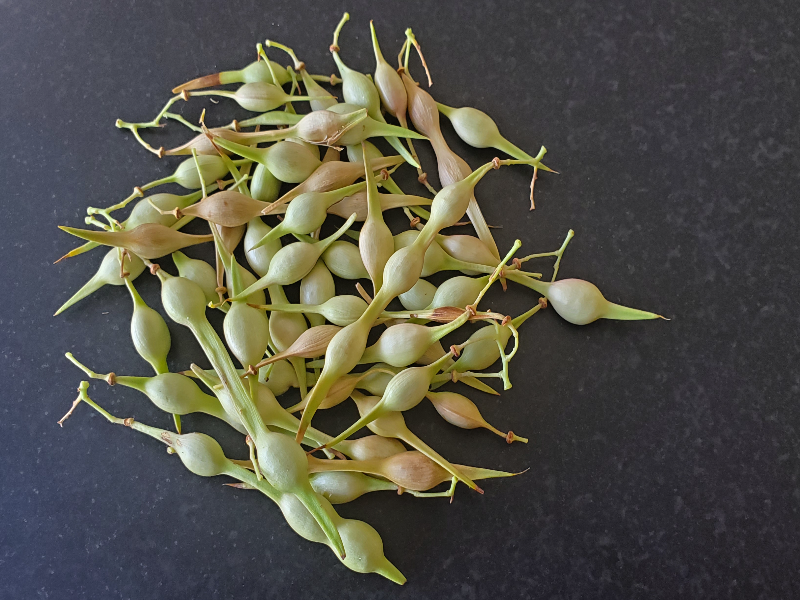 This time of year, I often catch the almost daily visits of three mule deer who crane their necks and sometimes even stand on their hind legs to enjoy a meal from the plethora of palo verde beans in my front and back yards.

You think it might have dawned on me to realize if they’re savoring the beans, shouldn’t I at least give them a try? So, after 16 years of watching them, I did a little harvesting, not sure what to expect.

The verdict? Pretty yummy! Luckily for me, I picked them while they were still green. The window of going from being a green pod to one that’s brown and dried is pretty small. The warmer it gets, the faster the process. The good news, however, is even when the pod dries, the beans are still edible.

Since 1954, both the Blue Palo Verde and Foothill Palo Verde varieties have been the Arizona State Tree and have been a food source for thousands of years. Both are native to southern Arizona. Needing more water than the Foothill trees, the Blue live in washes or arroyos and are the first to bloom. Their pods are flat, and they resemble small lima beans. Foothill pods contain two to four beans and are slightly sweet and taste like snow peas.

Foothill beans were sustenance for the Hohokam people, who according to oral histories, were the ancestral tribe to the Pima and Tohono O’odham. Like mesquite pods, they ground dried beans into flour.

The late archaeologist Emil Haury called the Hohokam “masters of the desert.” Their cultural pattern existed from the first years A.D. through about 1450. Most famous for their extensive irrigation canals along the Santa Cruz and San Pedro rivers in our area and the Gila and Salt rivers in Maricopa County, they were farmers able to successfully grow crops in the same locations for hundreds of years, creating a prosperous society. t’s a mystery why their once-flourishing culture came to end.

On July 22, it’s Lunch & Learn Asian Style with Slow Food Southern Arizona President and Certified Executive Chef Barry Infuso. This demonstration class is a fun way to treat yourself to a luscious Asian inspired summer lunch and have recipes to add to your kitchen repertoire. On the menu: Steamed artic char; baby bok choy; rice and for a sweet ending, Chinese almond cookies and tea.

From the glass to your palate, what are you tasting when you drink beer? On July 27, it’s Borderlands Brewing Co. craft beers with Head Brewer Ayla Kapahi to find out in an engaging class to learn the brewing process, style definitions, flavor differences in each category and the best part, how to taste. You’ll also get a worksheet, printed materials and a reference guide to take home.

Palo Verde Beans
Note: Pick the beans while they’re green. Shuck them right away and freeze in a plastic bag.

In a skillet, melt butter and add onion. Sauté until translucent; add garlic and cook about 30 seconds. Add tomatoes, chile and soy sauce, stirring to combine, then add beans. Cook gently for 5-7 minutes, then serve.