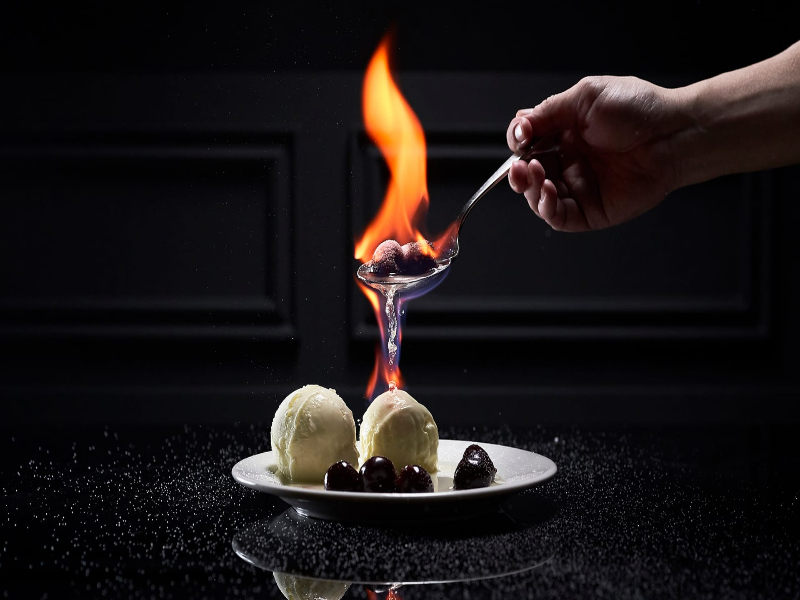 The Magic of Flambé

Count me in for anything flambé.

The lights dim, the flames magically and hypnotically dance. It’s theatrical and dramatic, making us home cooks look like a professional chef. So many choices: Tiki drinks like a scorpion, yes, please; cheesy Greek Saganaki, sure; Lobster à l’Americaine, absolutely; and my favorite, cherries jubilee.

Crêpes Suzette is perhaps the most famous flambé dish. Both the origin and dish’s name are disputed.

One story: In 1895, it was mistakenly created by 14-year-old assistant waiter Henri Charpentier at Monte Carlo’s Café de Paris. He was preparing a dessert for the Prince of Wales, future King Edward VII, whose guests included a beautiful French girl named Suzette. The story was told by Charpentier himself in his autobiography, “Life à la Henri,” but later contradicted by the “Larousse Gastronomique.” A 14-year-old assistant waiter serving a future king? Hmm…

Another claim: The dish honors French actress Suzanne Reichenberg (1853–1924), who worked professionally as Suzette. In 1897, in the role of a maid at the Comédie-Française, she served crêpes on stage. Monsieur Joseph, owner of Restaurant Marivaux, provider of the crêpes, decided one night to flambé them to attract the audience’s attention and keep the thin pancakes warm for the actors eating them. He was later director of the Paillard Restaurant in Paris and London’s Savoy Hotel.

Are you game to light a flame? Here’s what you’ll need to do.

1. Gather 80-proof liquor, a saucepan, large skillet or flambé pan, thermometer, long matches or a long lighter.
2. Heat liquor in a saucepan until bubbles begin to form, about 130ºF. Don’t bring to a boil or the raw alcohol needed to ignite the dish will burn off.
3. Pour warmed liquor into skillet or flambé pan filled with whatever you’re flambéing. Standing a safe distance from the stove, ignite immediately with match or lighter.
4. Gently shake the now-flaming pan to evenly distribute the alcohol and cook until flames disappear, generally in a few seconds.

I’m honoring my mom with her cherries jubilee recipe; today’s the anniversary she received her wings and she’d be thrilled it’s being shared. 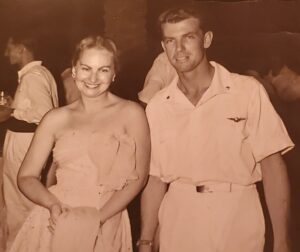 1. Cut peels into thin slivers. In a saucepan, add peels, water and sugar and simmer for 5 to 6 minutes or until peel is translucent. Cool.
2. Drain cherries, reserving liquid. Place cornstarch in a mixing bowl. Combine cherry liquid with enough wine to make 2 cups then slowly pour and stir into cornstarch. Add orange and lemon peel syrup, almonds and lemon juice. Cook, stirring, until sauce bubbles and thickens. Add cherries and pour into heatproof serving dish or flambé pan.
3. Warm brandy to lukewarm and pour over sauce. Step back, set aflame and carefully spoon, flaming, over servings of vanilla ice cream.
4. Sauce with cherries can be made ahead and reheated before flambéing.