In the Broadway show “The Music Man,” River City, Iowa residents greet the arrival of the Wells Fargo wagon, the Amazon delivery truck of its day, with song.

“Oho, the Wells Fargo wagon is a-comin’ down the street, oh, please let it be for me… It could be curtains or dishes or a double boiler or it could be, yes it could be, yes you’re right it surely could be somethin’ special, somethin’ very, very special now just for me.”

That something special of the moment doesn’t need a delivery vehicle, just a trip to the grocery store. And if you’re lucky and they’re roasting outside, you’ll smell them before laying eyes on them – New Mexico Hatch chiles are here!

Do you need a new chile ristra? What do you want to cook with this magical ingredient? Now’s the time.

You may be thinking, what makes Hatch chiles so unique? As beekeeper and sommelier Noel Patterson (and pretty much every great chef on the planet) would say, it’s all about the terroir or taste of the place – the environmental factors, especially soil and climate, that affect the crop.

The small village of Hatch, population about 1,650, stretches along the Rio Grande River’s southernmost bend before crossing into Texas and Mexico. The Hatch Valley’s 4,000 foot elevation, unique soil, abundant sunshine, hot days and cools nights combine to produce the chile’s complex flavor and texture that has a short about eight-week harvest season in August-September.

In 1921, Professor Fabián García, PhD, a Mexican American horticulturist described as the “father of New Mexican food,” developed the genetic ancestor of all New Mexico chiles at the New Mexico College of Agriculture and Mechanic Arts, now New Mexico State University. Among others, he bred new varieties of pecans and onions still grown in the state.

The 2022 Hatch Chile Festival, celebrating 50 years, takes place September 3-4, drawing about 30,000 chile heads from around the world enjoying the festivities, including a parade and chile eating contest.

Like grapes grown in France’s Champagne region, if you use grapes not grown there, you’ve made sparkling wine. While Hatch chiles grow elsewhere, if not from Hatch, they’re not the real deal and won’t taste the same.

Did you know its seeds are the same ones as the Anaheim chile? In the mid-1900s, farmer Emilio Ortega brought seeds from New Mexico and planted them in Anaheim, California, the first step in building the Ortega foods brand. Yep, terroir provides its different flavor profile.

Hatch varieties have a lovely balance between heat and sweet, with mild, medium, spicy and x-hot spiciness. Their flavor is kind of earthy, kind of like an onion; roasting brings heavenly smoky deliciousness that’s almost buttery. The red varieties are more mature than the green ones.

Roast in the oven, under the broiler, directly on a burner, in a cast iron pan or on the grill: Wash, thoroughly dry then roast until they char and blister about 60-70%; don’t let them turn completely black. When done, place in a bowl, cover with a plate or plastic to let them steam. When cool to the touch, slide the skin off. You may want to wear disposable gloves. You can remove the top and seeds. With or without the skin, they can be frozen whole. Place in a single layer in a freezer bag, pressing all the air out, then seal the bag. They’ll keep up to a year. Defrost overnight in refrigerator as needed.

On September 9, treat yourself or grab some friends for the demonstration Lunch & Learn Tucson Style class with award-winning cookbook author Carolyn Niethammer. On the menu: Prickly Pear Lemonade; Chicken Breast with Prickly Pear-Orange Sauce; Quinoa; Verdolagas, the highest plant-based source of omega-3 fatty acids, with onion and squash; and for a sweet ending, Mesquite Brownies. No cooking, just eating, but you’ll get the recipes.

Chris DeSimone may have hung up his chef coat to become a broadcaster, but he returns to the kitchen on September 20 For the Love of Meatballs: Italian & Greek Style. Italian style uses beef, pork, caramelized onions and spices as well preparing marinara sauce for your sub sandwich topped with mozzarella cheese. Chicken, turkey, garlic and feta cheese flavor the Greek version, along with creating the perfect accompaniment, tzatziki sauce, to slather on crispy bread.

On September 26, Chef Janet Balderas, who’ll be running the kitchen at the highly anticipated Mojo Cuban Kitchen & Rum Bar, will bring those flavors to her class. Stay tuned for the details.

The Arizona Wildcats football season begins September 3 and on October 20, cook with legends Coach Ricky and LaMonte Hunley in their Cooking with the Wildcats class. They know their way around the kitchen like they did on the field! On the menu: Lemon and Wine Marinated Baked Salmon; Bok Choy Salad with Strawberry, Pear, Apple, Jalapeño and Sesame Seeds; Sautéed Spinach; and Key Lime Pie. 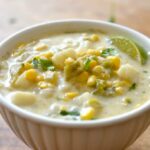 1. In a large stockpot over medium-high heat, add butter and heat about 1 minute or until butter melts. Add onions, garlic and celery. Cook 3–5 minutes or until the onion is translucent. Add parsley, thyme, chiles, potatoes and salt. Mix well. Add vegetable broth.
2. Bring to a boil and cook about 35 minutes or until potatoes are tender. Add heavy cream and reduce heat to low. Cook another 5 minutes or until heated through. Taste and adjust salt if needed. Garnish with cheddar cheese and cilantro leaves.