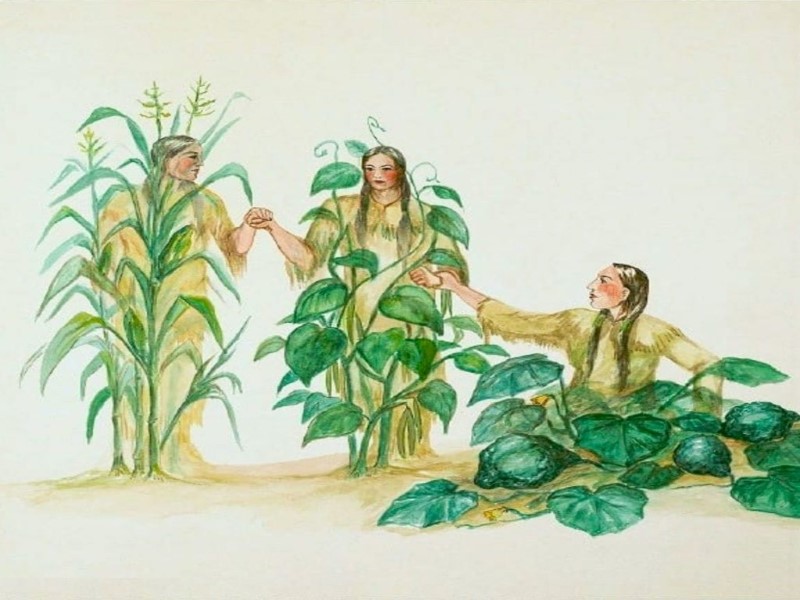 Who are the three sisters?

From home gardens to farm stands and markets to grocery aisles, corn, beans and squash – the Three Sisters – are at peak season. Sure, I know we refer to the trio this way, but what’s the tradition and story behind the name?

For centuries these crops have been at the center of Native American agriculture. They complement each other in the garden and make the diet complete with carbohydrates, proteins, amino acids, vitamins and minerals.

The tradition originated with the Haudenosaunee, (Ho-deh-no-shaw-nee), also known as the Iroquois. This story is attributed to them.

“Very long ago, there were three sisters who lived in a field. The youngest was so small she could not yet walk; she crawled along the ground, dressed in green. The middle sister wore a bright yellow dress and darted back and forth across the field. The eldest sister stood tall and straight, and her body bent with the wind. She had long yellow hair and wore a green shawl. The three sisters loved one another very much and could not imagine living without the others.

“One day a little Indian boy came to the field. He was very handsome and knew the ways of the land. He could talk with the birds and the animals and was straight and fearless. The three sisters were very interested in this boy as they watched him use his stone knife to carve a bowl or hunt with his bow and arrow.

“Late in the summer of the boy’s first visit to the field, the youngest of the three sisters disappeared. She was the one who could only creep along the ground; she could not even stand unless there was a stick she could cling to. But she was gone, and the other two sisters mourned her until the fall.

“The Indian boy returned to the field to gather reeds that grew at the edge of a small stream. He used the reeds to make arrow shafts. The two remaining sisters again watched him, fascinated. That night, the second sister disappeared, the one who always wandered hither and yon.

“Now there was only one sister left, the tall and straight sister. She did not bow her head in sorrow, though she mourned deeply and thought she could not live in the field alone without her sisters. As the days grew shorter and colder, her green shawl began to lose its color and her yellow hair became dry and tangled. Night and day she sighed for her sisters, but her voice was low like the wind, and no one heard her.

“One day in the harvest season, the little Indian boy heard the third sister crying, and he felt sorry for her. He took her in his arms and carried her to his home, and there a delightful surprise awaited her: Her sisters were there in the lodge, safe and very glad to be reunited. They explained that they had been curious about the little Indian boy and had followed him home, and they had decided to stay because winter was coming and his home was warm and comfortable.

“The sisters also were making themselves useful to the boy and his family. The youngest, now all grown up, kept the dinner pot full, while the second sister, still in her yellow dress, dried herself on the shelf so she could fill the dinner pot later in the winter. The eldest sister was so pleased to be with her sisters again and so impressed with the help they gave the boy that she too began drying herself so the family would have meal to use as the winter went on.

“And from that day to this, the three sisters were never separated again.”

Thurs., Aug. 26, 6:00-7:30 p.m. In-person or Zoom Class: Desert Treasures – Prickly Pear, Mesquite & Nopalitos with Cookbook Author Carolyn Niethammer. This year, the Sonoran Desert has produced a bounty of heritage foods we love – prickly pear, mesquite and nopalitos – and who better than award-winning cookbook author Carolyn to cook along with for a perfect summer dinner?
Fri., Aug. 27, 5-9 p.m. Tucson After Dark Food Tour: The 23 Miles of the Best Mexican Food in the U.S. The mind blowing Best 23 Miles of Mexican Food in the United States is what’s on the menu on this Gray Line escorted tour with foodies KVOI’s Chris DeSimone and Visit Tucson’s Felipe Garcia your genial and knowledgeable hosts. Showcasing modernized classics, tried-and-true favorites and everything in between, when looking for the authentic true taste of Tucson, it’s an experience not to miss.
Mon., Aug. 29, 6:00-7:30 p.m. In-person or Zoom Class: BBQ & Grilling with Boulevard Barbecue & Fixins co-owner Chef/Pitmaster David Martin. Do you love the taste of smoky, sweet barbecue done to juicy perfection? Have you tried barbecuing at home only to be disappointed with the results? You’re not alone! Barbecuing is an art form and after learning from renowned Chef/Pitmaster David you’ll confidently smoke and grill mouth-watering meats every time.

Last call! Time’s running out to get your Christmas in July gift cards from Tucson Originals; spend $100 and get $20. 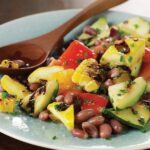 For the vinaigrette:
1. In a small bowl, combine all the ingredients and whisk to blend. Cover and refrigerate at least 1 hour or up to 10 days.

For the salad:
1. Prepare a hot fire in a charcoal grill or preheat a gas grill to high.
2. Brush zucchini, squash and corn with oil. Season vegetables on all sides with salt and pepper. Grill zucchini and squash until crisp-tender and grill-marked on both sides, about 10 minutes. At the same time, grill corn until lightly browned, turning to cook all sides, 4-5 minutes.
3. Transfer zucchini and squash to a cutting board and finely dice, then empty into a large bowl. Cut the kernels from the corn and add to the bowl along with beans and tomatoes. Add ¼ cup vinaigrette and toss to coat. Season with salt and pepper and toss again.
4. Serve at room temperature or cold.