It’s so interesting how certain dishes develop a cult following. My earliest devotion was to the fried clams at Howard Johnson’s at the Jersey Shore with the caveat that was the only place to eat them. What’s yours?

You can get on a bandwagon or start a following so easily now thanks to mouthwatering social media photos and glowing testimonials.

Chef Juan Almanza’s birria – found a number of ways at his El Taco Rustico restaurant – has a rabid following, particularly the quesabirria tacos. The birria is so incredible that Zio Peppe’s Chef/Co-owner Devon Sanner uses it on his El Rustico Birria pizza – “legendary beef birria, mozzarella, onion, cilantro and consommé.” It’s the most popular pizza on the menu.

Cocula, Jalisco, Mexico, southwest of Guadalajara, is birria’s birthplace.  The area was home to many nomadic tribes going back 10,000-12,000 years ago.

In the 16th century, during the era of the “Conquista,” the cultural exchange between the Spaniards and the Mexicans changed the way they lived and ate, creating new foods and traditions. The conquistadors introduced exotic spices and animal species never seen on this side of the Atlantic.

The first hundred years after the conquest were difficult and devastating for the Mexican people; the alarming decrease in the native population caused by disease and subjugation of the conquistadors was part of the reason for their annihilation.

Some newly introduced animals, pigs, chickens and cattle, were well accepted by those living there. Not all the new farm animals enjoyed acceptance; as was the case for goats.

Goats became a real nuisance. They bred quickly, eating everything in their path, causing devastation to field crops, seedbeds and the land. Paddocks and fencing didn’t exist and before the conquest no large farm animals roamed the land.

During the time of famine, locals began using goats for meat. And just like that, the first “birriero” (birria maker) was born.

Goat meat is very gamey, especially the meat of older goats. To counteract its strong taste and smell, they began adding different herbs and fragrant spices. By cooking it in the ground or in kilns, the meat softened and became palatable.

Today, birria is also made with beef and lamb.

Also on the menu: Salsa, the birria garnishes of veggies, onion, cilantro, cabbage and limes and for dessert, flan. Fresh already made tortillas will hold the cheesy quesabirria tacos ready for dipping in the consommé. Just a handful of seats remain so don’t miss out. 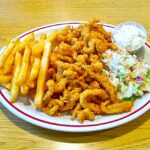 1. Combine evaporated milk and whole milk, egg, vanilla, salt and pepper. Soak clams in liquid and then dredge in combination of cake flour and cornmeal, fluffing them in the flour mixture for light but thorough coverage. Shake off excess flour and fry in oil.