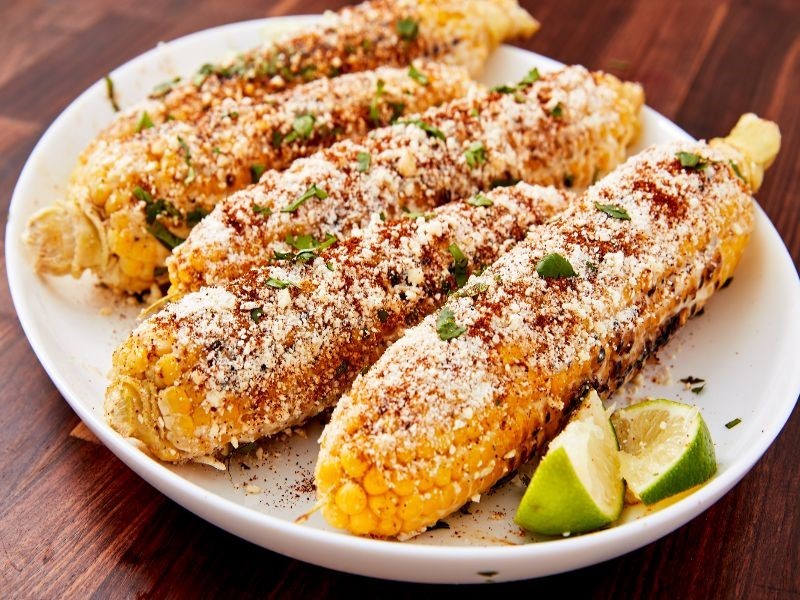 As a child, I believed summer corn on the cob was one of the tastiest and perfect foods to eat. The New Jersey (aka The Garden State) farm stands of freshly picked deliciousness are burned in my memory.

Like opening a present, you peel away the husks and silks revealing the yummy gift. Oh, that first sweet bite and the crunching sound emanating from it. There couldn’t possibly be anything better. Or could there be?

Yep. There is: Elote.

One of the few crops indigenous to the New World, from 6600 BCE–3500 BCE, starting in Honduras, corn was domesticated, becoming a staple for indigenous peoples from Peru to Mexico. In the 15th and 16th centuries, thanks to Columbus bringing corn from the Caribbean to Europe, it was called maize, taken from the word mahiz used by the Taino people who at the time of Columbus’ exploration were the principal inhabitants of Cuba, Hispaniola, Jamaica, Puerto Rico, the Bahamas and the northern Lesser Antilles.

Charred corn, butter, mayonnaise, chili powder, cotija cheese, lime and cilantro. Quick and easy to make incredible eats. Better plan on more than one per person! These flavors have also inspired other recipes.

In Tucson, there are many great restaurants who’ve put their spin on elote. Empire Pizza has an elote pie; Toro Loco Tacos features street corn chicken tacos and burros; an elotero hot dog can be had at The Black Top Grill; the Nook‘s menu has street corn avocado toast; Zio Peppe has elote arancini (which I’ve had like three times); the Red Light Lounge at the Downtown Clifton has elote by itself or on frybread and Charro Steak & del Rey features it, too.

1. Preheat grill to medium-high heat and lightly oil the grate.
2. Brush pineapple and corn with oil and carefully place on the grill. Cook pineapple until grill marks appear, about 3 minutes. Flip and leave on heat just until grill marks appear on the second side, about 3 minutes more; don’t overcook or it will become mushy.
3. Grill corn, turning throughout, until somewhat charred, 3-5 minutes. Remove from grill and cool until safe too handle, then cut kernels off cobs into a bowl.
4. Assemble 2 bowls by spooning equal amounts of rice into the bottom and topping each with ½ the corn kernels. Spoon crema over corn and drizzle with hot sauce. Add 2-3 pineapple rings to each bowl and top with cotija cheese and cilantro. Add salt, pepper and a squeeze of lime juice.