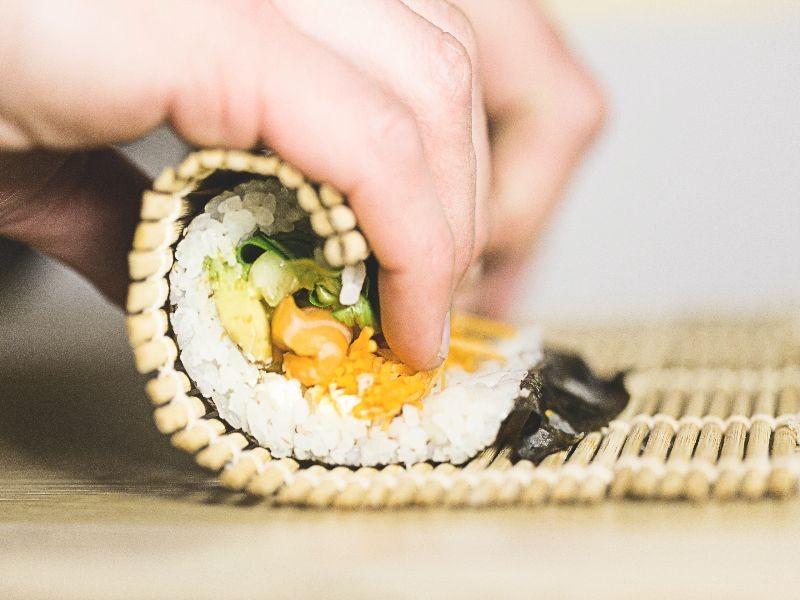 Avocado roll. Veggie roll. Shrimp tempura roll. California roll (with real crab, not the kind spelled with a k). Looks like my favorite sushi list is pretty short considering all the options out there. What’s on yours?

I readily admit my sushi knowledge is kind of like my list – short – but I do know one thing – it’s all about the rice! I can judge fantastic rice from so-so rice from the first bite.

What makes great sushi rice? Truth be told, other than my taste buds, I have no idea. Someone who does is Chef Tommy Begay III. His sushi rice “apprenticeship” lasted about a year. Come to find out, that’s not an usual amount of time to perfect the art of great sushi rice.

On May 19, cook and learn from Chef Tommy in Sushi 101. The class is a primer for future ones he’ll teach, delving deep into all kinds of sushi combinations and techniques. You’ll master sushi rice, veggie rolls using nori seaweed sheets and shrimp negiri, plus we’re giving you two sushi rolling mats.

Like folklore surrounding food with ancient roots, sushi has plenty of stories. One dates to an ancient Japanese wives-tale. Seem an elderly woman was hiding her rice pots in osprey nests to keep thieves from stealing them. Time passed and when she collected the pots, she discovered the rice was fermenting and contained fish scraps the osprey dropped. The result was tasty rice and preserved fish.

As sushi preparation evolved, fermentation and taking days to prepare before eating became a thing of the past.

Known as Edo-mae, this sushi was named for the city of Edo (Tokyo), where according to one popular legend, it was invented around 1824 by Chef Hanaya Yohei (1799-1858). Slices of cooked or cured fish were laid over vinegar-seasoned rice. Before being served, each fish slice was steeped in vinegar or soy sauce, or coated in a thick layer of salt to ensure consistency of taste and freshness.

Refrigeration created the sushi we know today, making it possible to use raw fish and allowing varieties that previously couldn’t be used because there wasn’t a suitable way to cure of cook them, like tuna, to become popular.

After World War II, sushi’s popularity grew and by the 1960s, Californians created their own version called the inside-out roll. Clever variations have been introduced the world over.

The chefs and I would love to see you soon. On Monday, it’s all about your fur babies in Pawsitively Pawsome Dog Treats with Dogs-n-Donuts’ Christa Parsons. If you’re in Tucson, a bone-shaped cutter and your ingredients are free! You’re also doing good and helping AZ K9 Heroes, a 501 (c)(3) nonprofit dedicated to law enforcement K9 units in Tucson, Sierra Vista, Phoenix, as well as some county areas, with $10 of your registration fee supporting their work.

On May 25, it’s Pizza with Chef Mat Cable. Chef Mat is gifting you ready-to-go dough and it’ll be fun and delicious making fresh mozzarella and sauce. The endless topping possibilities are up to you. Part of our monthly Tucson Originals series, you could be the lucky recipient of a $50 gift card to use at the 26-member restaurants. 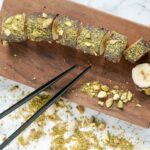 1. Peel bananas and stick a toothpick in both ends, so it’s easier to hold while covering with chocolate.
2. Cover bananas with melted chocolate, then sprinkle with chopped pistachios.
3. Place on a parchment lined baking sheet and freeze for a few minutes, allowing chocolate to set.
4. Once set, use a sharp knife and cut into bite-sized pieces.
5. Refrigerate in an airtight container up to 3 days.