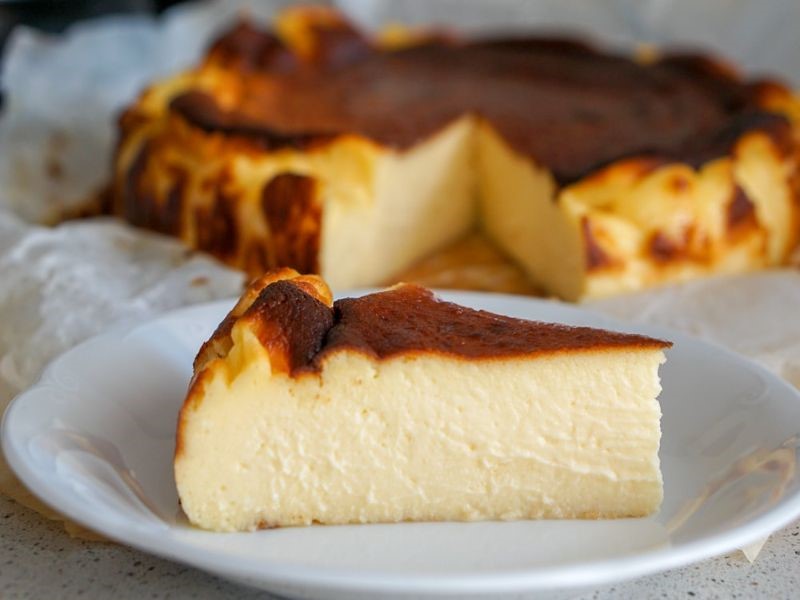 Cheesecake: A slice of nirvana on a plate.

Do you know The Cheesecake Factory has 33 different kinds on its menu? Really?! Call me a purist, old-fashioned or unimaginative, but isn’t one that’s lusciously creamy with a butter cookie crust all the world needs? No sour cream, ricotta or mascarpone cheeses, thank you anyway. I’ll take mine with just cream cheese, please.

And toppings, swirled in anything or heaven forbid, cake layers? Oh no, never! To me, that’s culinary heresy. My tried-and-true filling is Philadelphia Cream Cheese, eggs plus additional yolks, sugar and a little milk.

It’s believed cheesecake originated in ancient Greece and may have been served to athletes to give them energy at the first Olympic Games in 776 B.C. Greek brides of the era also cooked and served cheesecake to their wedding guests.

Most traditional Greek cheesecake is made with ricotta cheese. If you want the real version, use authentic unsalted anthotyros or myzirtha cheeses made from goat’s or sheep’s milk. Greek cheesecake is usually sweetened with honey. Some recipes incorporate flour directly into the cheese/honey mixture prior to baking, while others have a crust.

Recipes for cream cheese are found in U.S. cookbooks and newspapers beginning in the mid-18th century. By the 1820s, dairy farms near Philadelphia and New York City gained a reputation for producing the best examples.

In the late nineteenth century, Americans who aspired to high social status hungered for luxury foods. At the same time, production of cream cheese and demand for it increased as cheese making shifted from home production to factories. The first modern cheese factories opened in New York, where dairy farming had expanded substantially after completion of the Erie Canal in 1825 linked New York City with the interior.

According to the “Encyclopedia of Greater Philadelphia,” among the many cheese factory operators in New York, dairy farmer William A. Lawrence (1842-1911) opened his facility in 1862 in Orange County. Prompted by a request from an upscale grocer in New York City, in 1875 he became the first to factory-produce cream cheese. In 1880, he joined forces with distributor Alvah Reynolds (1830-1925), who came up with a brand he felt would associate Lawrence’s product with high-quality foods: Philadelphia Cream Cheese. Reynolds manufactured Philadelphia Cream Cheese from 1882 until 1903, then sold the brand to the Phenix Cheese Company of New York. In 1928, Phenix merged with Chicago-based Kraft Foods, which through another merger in 2015 became Kraft Heinz.

How about making a yummy Spanish version? The Basque Burnt Cheesecake is the way to go. Yes, burnt is part of its flavor and charm. Snap a photo and send me your results.

This original recipe, from La Viña in San Sebastián, dates to the 1970s. The restaurant uses Philadelphia Cream Cheese.

1. Place a rack in middle of oven; preheat to 400° F. Butter a 10-inch springform pan, then line with 2 overlapping 16- x 12-inch sheets of parchment paper, ensuring parchment comes at least 2 inches above top of pan on all sides, then butter the paper. Since the parchment needs to be pleated and creased in some areas to fit the pan, you won’t end up with a clean, smooth outer edge of the cake. Place pan on a rimmed baking sheet.
2. In the bowl of a stand mixer fitted with paddle attachment, beat cream cheese and sugar on medium-low speed, scraping down sides of bowl, until smooth, no lumps remain and sugar has dissolved, about 2 minutes.
3. Increase speed to medium and add eggs one at a time, beating 15 seconds before adding the next. Scrape down sides of bowl, then reduce mixer speed to medium-low. Add heavy cream, salt and vanilla and beat until combined, about 30 seconds.
4. Turn off mixer; sift flour evenly over cream cheese mixture. Beat on low speed until incorporated, about 15 seconds. Scrape down sides of bowl and continue to beat until batter is very smooth and silky, about 10 seconds.
5. Pour batter into prepared pan. Tap pan on the counter to release any excess air bubbles. Bake until puffed, very well browned and nearly burned on the edges, 50-60 minutes. The center shouldn’t be completely set. It will wiggle like Jell-O when moving the pan.
6. Cool to room temperature (it will fall drastically), at least 30 minutes, then unmold by lifting out onto a plate and peeling back parchment paper, using a knife or spatula if needed. Refrigerate until thoroughly chilled, 4 hours to overnight.
7. Slice into wedges and serve at room temperature. A glass of sherry is the perfect accompaniment.
8. Cheesecake can be made 1 day ahead. Cover and chill. Be sure to let cheesecake sit for several hours at room temperature to remove chill before serving.