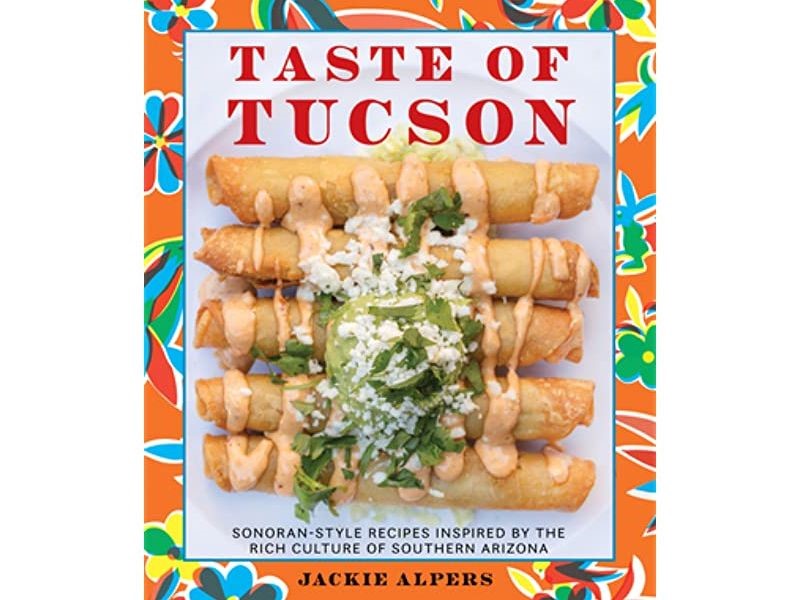 A year ago, Jackie Alpers’ second cookbook, “Taste of Tucson: Sonoran-Style Recipes Inspired by the Rich Culture of Southern Arizona,” was published. Filled with her creations, as well as dishes from some of Tucson’s best-know chefs, it’s been a huge hit. It wasn’t easy navigating how to virtually promote a book but now lots of cookbook collectors around the world are experiencing tastes of Tucson.

What’s your taste of Tucson? Painting with a broad brush, there are days I say anything from my kitchen tastes like Tucson. But hold on, that’s merely geography.

Thinking more seriously, from my kitchen it’s got to be prickly pear jelly. I’m lucky to be able to harvest the fruit from my yard. It’s a labor of love cooking and processing the fruit and ending up with the gorgeous deep ruby/fuchsia juice. It’s earthy and bright, drawing flavor from the soil and the ability to thrive and flower no matter how little rain it gets. When a batch gels, it’s kitchen happy dance time. When it doesn’t set and has to be redone, well, no dancing…

In the 1920s, Monica Flin, El Charro founder and great-grand-aunt to Chef Carlotta Flores, accidently dropped a burro into a pan where she was frying ground beef tacos. She began to utter a Spanish curse word, but children were nearby, so she changed it to “chimichanga,” which as the story goes, loosely translated means that thingamajig or something along those lines.

On May 12, a fun and delicious evening awaits cooking along with Jackie and talking the iconic flavors that make Tucson special. On the menu: Corn masa flat enchiladas with red chile beef. Also, since she’s an acclaimed professional food photographer, you may also learn how to snap the best Instagram-worthy photos of your dish.

“Here is an introduction to the art of deep-frying tiny burritos, from Carlotta Flores, proprietor of El Charro Café. Use one of the filling suggestions below—try mixing and matching them—or use your imagination and come up with your own. Serve savory chimis with bowls of salsa, sour cream and guacamole for dipping. Dust sweet chimis with powdered sugar after frying.”

1. Fill a large stockpot or Dutch oven with 2 inches of oil, being sure to leave at least 4 inches of clearance between the oil and top of the pot (for safety). Set the pot over medium-high heat until the oil reaches 350°F on a deep-frying thermometer.
2. Lay at tortilla flat on a smooth work surface. Fold up the bottom third of the tortilla to make a flat end.
3. Place about 2 tablespoons of the filling of your choice on the flat-end base. Then, Carlotta says, “Roll the base and filling one turn up so that the fold is in the center/wider part of the tortilla. Next, fold the two shorter ends in and roll again, once or twice until you have a neat little package.”
4. Secure the ends with toothpicks. Repeat with remaining tortillas and filling. Using tongs, gently place the mini chimis in the hot oil. Fry until golden, about 5 minutes, turning them as needed to brown evenly. Let drain on paper towels, then remove toothpicks and serve immediately.
Variation: Baked chimis
Have a fear of frying? Bake the chimichangas instead at 350°F until golden brown and puffy, 12-15 minutes.

*Recipes included in “Taste of Tucson: Sonoran-Style Recipes Inspired by the Rich Culture of Southern Arizona.” 16 Tucson chefs contributed Sonoran-centric recipes, too. If you haven’t purchased your copy yet, it’s available locally at Antigone Books, the University of Arizona BookStores, Why I Love Where I Live, as well as everywhere books are sold.