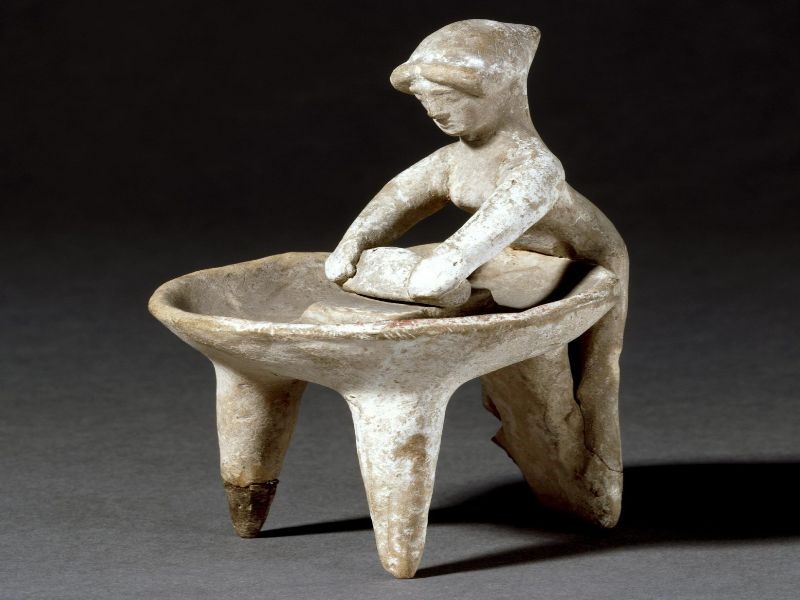 The idea began rather simply during a phone discussion with my friend Patti on whether or not Fastnachts, the Pennsylvania Dutch doughnuts made with lard, yeast and potatoes and eaten on Shrove Tuesday, could be found in Tucson. Sadly, no and since it was already Monday night, it was too late to whip up a batch.

It got me thinking about what else could I make and eat like my ancestors did to use up the sugar, butter, eggs and other rich foods in the house before the austere diet of Lent began?

“Let us find time to speak of other cakes, the ones made with wheat ﬂour. Teganitai, as we call them, are made simply with oil. The oil is put in a frying pan resting on a smokeless ﬁre, and when it has heated, the wheat ﬂour, mixed with plenty of water, is poured on. Rapidly, as it fries in the oil, it sets and thickens like fresh cheese setting in the baskets. And at this point the cooks turn it, putting the visible side under, next to the pan, and bringing the sufficiently fried side, which was underneath at ﬁrst, up on to the top, and when the underneath is set they turn it again another two or maybe three times till they think it is all equally cooked. Some mix it with honey, and others again with sea-salt.” Galen (c.130 AD – c.210 AD), physician, writer and philosopher who became the most famous doctor in the Roman Empire and whose theories dominated European medicine for 1,500 years.

Were pancakes one of the earliest street foods? In the late 6th century BC, the Greek poet Hipponax wrote of pancakes “drugged with sesame seeds,” thought to be sold from portable braziers throughout Athens.

I’ll never look at a pancake the same way. How about you?

While we don’t have pancakes on the menu in March, there’s lots of delicious fun to be had. We go inside the winemaker’s kitchen with Mark Beres of Flying Leap Vineyards for coq au vin; Pastry Chef Marianne Banes of Kingfisher Bar & Grill celebrates Passover with two fabulous and flourless desserts; spend St. Patrick’s Day celebrating Irish and all things green with Chef Judith Baigent-King.

Pancakes with Honey and Sesame Seeds
The recipe is from “The Classical Cookbook” by Andrew Dalby and Sally Grainger, published by The British Museum Press, which uses Greek and Latin texts to create dishes from Homeric Greece to the Roman Empire.

Yield: 4 pancakes
Substitute honey for maple or date syrup to make these vegan.

1. Mix the ﬂour, water and one tablespoon of honey together into a batter. Heat two tablespoons of oil in a frying pan and pour a quarter of the mixture in. When it has set, turn it two or three times to give an even color. Cook three more pancakes in the same way. Serve all four pancakes hot with the remainder of the honey poured over and sprinkled with sesame seeds. 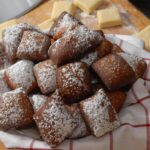 Traditional says the only true fastnacht is one that is square, made with potato and has no frosting, fillings or sprinkles — and definitely no holes.

1. In a medium saucepan, add potatoes covered with cold water 2 inches above potatoes. Season generously with salt and over high heat, bring to a boil. Once boiling, reduce heat to a simmer and cook about 15 minutes or until very tender. Remove 1 ½ cups of potato water, then drain and mash or use a ricer or food mill until very smooth. Set aside and allow to cool slightly.
2. In a medium bowl, stir together the potatoes, potato cooking water, sugar and yeast. Cover with a towel and let the mixture rise for 20 minutes; it will look foamy.
3. Using a sieve, strain the mixture into a large bowl, getting rid of any lumps. Stir in the eggs and melted butter. Stir 5 cups of the flour, one cup at a time, until a dough starts to form. Gently knead in the remaining 1 cup of flour in until the dough pulls away from the sides of the bowl and forms a large ball. Cover with the towel, place in a warm area and let rise about 3 hours.
4. Dust some flour on a baking sheet. On a well-floured surface, roll the dough out to ½-inch thick. Using a sharp knife, cut into 3-inch squares and set on the prepared baking sheet. Cover lightly with a towel and let rise for 30 minutes.
5. Line a baking sheet with a split paper bag. In a deep fryer or Dutch oven, pour enough oil to fill no more than halfway up the side. Heat the oil until a candy thermometer reaches 370 ° F.
6. Gently place the doughnuts, two at a time, into the oil. Cook until golden brown, about 2 minutes per side. Transfer the fastnachts to the prepared baking sheet to absorb some of the oil. Place the doughnuts in the remaining paper bag with a heaping spoonful of sugar and shake gently until the doughnuts are thoroughly coated. Serve immediately.